In a stormy sea called Roaring Forties, big waves attacked Aomi one after another. 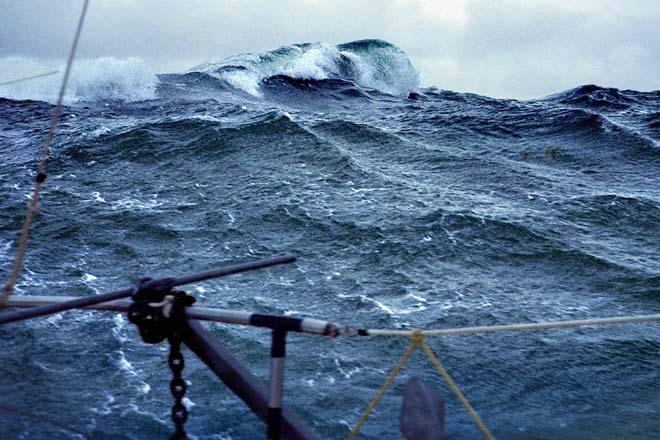 While crossing the rough sea of life, unexpected accidents, bad luck, deadly illnesses, and disasters can sometimes make you feel, "It can't be true!"

The case I had experienced five years after leaving Japan was, no doubt, one of them.

A single-handed sailboat Aomi (7.5 m) left Buenos Aires, the capital of Argentina, and was sailing down the South Atlantic toward Antarctica.

When the sound of wind suddenly got stronger just after sunset, waves on the black water began to grow in height rapidly. Their peaks, soon, started to roll, collapse and attack Aomi one after another.

"Don't get heavier!" I shouted.

I go into the cabin, take the boots and oilskin off, and lie down in the berth of Aomi shaking violently.

After midnight, a crack like breaking giant glass has sounded in the dark. At the same time, the impact of the wave throws my body into the air. I feel for the switchboard with my hands in a hurry and turn on the cabin light.

I have regained the sense of up-and-down and quickly understood the situation.

Aomi, capsized by the wave, has turned back to normal by the balancing effect of the heavy ballast attached to the bottom. Though having been running like an arrow, Aomi seems to have stopped and is rolling heavily.

I open the sliding hatch in a hurry, grasp a flashlight and turn it upward.

There is no mast! The mast has gone. What should never happen have become a reality, though I have had a belief that I am not such a beginner or a fool.

"This ends my entire dream. Everything has gone wrong."

For more than one year in Buenos Aires, I had prepared and modified Aomi for ice and coldness, and worked hard as a private teacher to make money just for going to Antarctica. What was that for? The power of my whole body goes out. 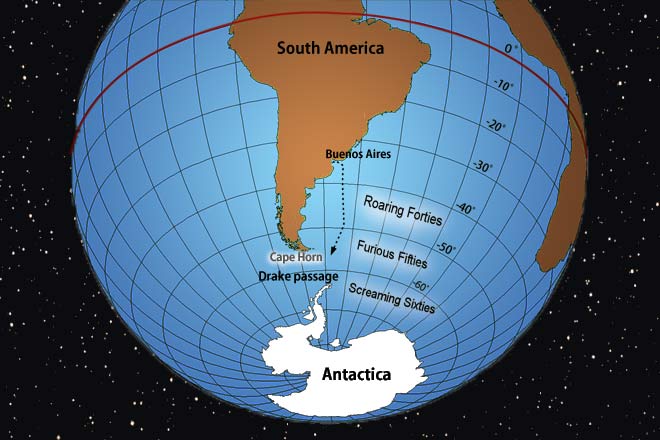 By the way, what is the dull sound to hear for the first time, and what is the shock suddenly stops the motion of Aomi being shaken by waves?

I open the sliding hatch, get my upper body out in the complete darkness, and turn a flashlight to the water.

"I have never seen such a strange thing. Plants or animals?" I grumbled.

Something, like a pillar with long silvery whiskers or ivy curled around it, is sticking out of the water.

It's the broken upper 3/4 of the mast half-submerged, but still connected to the deck with seven stainless wires.

Each time a wave attacks and shakes Aomi, the broken mast in the water hits her body severely. That will make a hole in the hull and sinks Aomi! I put on an oilskin and a safety harness, and come out of the cabin into the spray-filled darkness.

The accident in my early 30s was the biggest shock in my life then. I realized that the conviction, "It can't happen to me," was just a belief.

What you should consider is not only the height of waves. You have to realize the density and destructive power of water, which is more than 800 times bigger than air.

Since we are blown by the wind often but seldom by water, we are unfamiliar with its power.

Ignorance and imprudence may cause a fatal accident at sea.

Please help me translate the site.
Free checks on the writing by native speakers are needed.
E-mail

The above is an episode of Aomi in the South Atlantic Ocean. You may think the title, "Exploding waves," is a bit exaggerated, but it may be suitable because of the reason below.

Grasping the photo opportunity is very difficult, even when you are aiming your camera at the waves. The wave head collapses in an instant, and the next moment, waves cover whole your body. The image of the wave, which suddenly breaks in white, is very close to the dazzling white of an explosion.

I took the above photos in the South Atlantic Ocean. Are they frightening to you? The left one might seem more powerful than the right one, but you have to consider the distance.

I took these photos when Aoim was heading toward the north in the South Atlantic Ocean, and then Aomi capsized even twice in the same night, got the mast bent and 1.7m open-crack in the hull. Two years later, when sailing for Antarctica, Aomi overturned again and lost the mast as described above.

Why did Aomi capsize many times in the Southern Hemisphere? Why is the southern sea, very rough?

Cape Horn, regarded as the southernmost of South America, had been widely feared as the most dangerous and terrible spot for sailors since the Age of Discovery. Why?

Generally, the sea becomes rougher as the latitude increases. Sailing in higher latitude may be harder and more painful. It would be far better to choose a route at lower latitude near the equator.

Again, why were European sailors, in the Age of Discovery, afraid of Cape Horn so much? Is it due to the high latitude?

London in the U.K. is located at 51° N and Oslo in Norway at 60° N. Though their latitudes are as high as that of Cape Horn, why were the European sailors afraid of Cape Horn so much?

There is a significant difference between the Northern and the Southern Hemispheres.

Land works as a resistance to wind and prevents wave and swell to grow up. There is little chance for wind and wave to weaken in the Southern Hemisphere.

Another factor is the cold of Antarctica. What is the relationship between the coldness and the roughness of the sea?

A cause of wind is the difference in temperature.

The reason why they were afraid of Cape Horn very much, is not only described above but also the steep triangle waves, shallow seabed, some currents. I might have an opportunity to explain those later.

Why can a sailboat capsize? On which occasion does it overturn or become upside down?

If there are very high and steep waves like above, A boat can capsize readily, but low waves can also cause a capsize.

When the stream, caused by a breaking wave, hits a boat with a shallow bottom, it may move parallel to the water and get no damage.

A boat having a ballast-keel sticking out of the bottom, like a sailboat, may capsize easily because the force to the keel turns it over.

Running in a side wind is very dangerous for a sailboat, especially when high waves are breaking, because the wave direction and the side of the boat are at right angles.

You might think, "I never do such a stupid thing," but you can't avoid it, because a boat may lose control of itself due to weather-helm, or a breaking wave might hit and turn her side toward the wave.

You have to pay particular attention when sailing in a following wind with a wind-vane-self-steering system if it is attached to the stern. It has a positive-feedback property.

When you are running in the following wind and get an attack of a breaking wave, it may push her stern aside, and turns her side to the wave. During the unwanted motion, by the apparent wind caused by the move, the wind vane steers to boost the unwanted motion instead of correcting the heading.

You can avoid this positive-feedback problem by using an electric autopilot with a compass sensor, or put your wind vane on the midship or the bow! 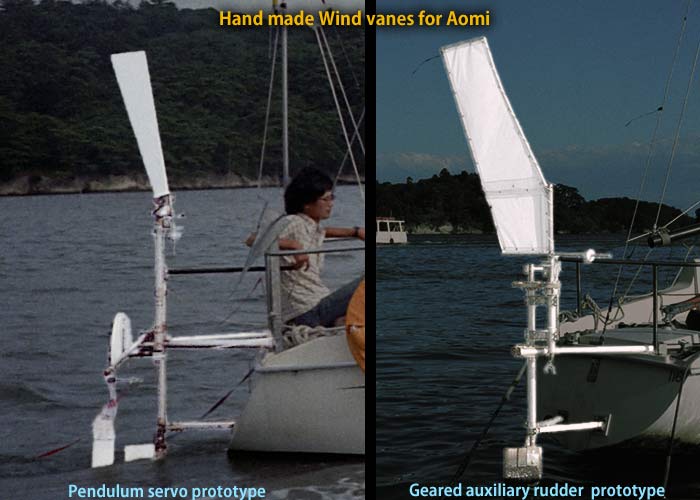 *The episode after the capsize, and the reason why I decided to go to Antarctica, let me tell you later.

Please help me translate the site.
Free checks on the writing by native speakers are needed.
E-mail

Back to main page.